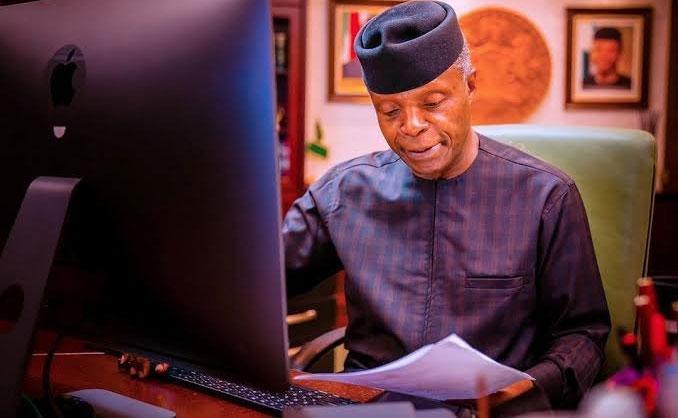 The Voice of Nigerian Youth Initiative has declared Vice President Yemi Osinbajo a winner in the just-concluded All Progressives Congress, APC, presidential primaries, despite losing the ticket to former Lagos governor and a chieftain of the party, Asiwaju Bola Tinubu.

In a statement signed by Co-Founder of the initiative, Mrs. Temi Okesanjo, the group said young Nigerians expressed their heartfelt conviction that the VP won because they believed in his leadership and the hope he inspires.

The statement read: ‘’It is our firm belief that, regardless of the outcome of your party primaries, you are a winner.

‘’You won because the Nigerian youths believe in your leadership and the joy that comes with the hope you bring; the hope many had lost before now.

‘’You won because those who hijacked and controlled the process altered what would have been a voluntary embrace of change.

‘’You won because we will continue to look up to you for answers, even as we do not see clearly when you will be crowned to give these answers.

‘’They say people shouldn’t have what they didn’t fight for, but the ones who couldn’t be induced didn’t get a chance to vote.

‘’We didn’t let you down; they know we wouldn’t, that is why it was mandatory to hijack the initial process to voting our next president.

‘’You came with a different sense of capacity to change; the change that has been disbelieved and misunderstood by the people.

‘’We are sad that the hijack of the process may have taken us 10 years backwards, but we are happy because we fought a good fight and we still have you with us.

‘’We hope that you will continue to give yourself to this country the way you have done relentlessly, knowing we need you.

‘’Your person and strength of character is almost unbelievable. You are so high up, yet gifted with a common touch that resonates with everyone.

‘’You have taught us one of the most important lessons of life: to stand firm, in spite of the many contrived and obstructing plots.

‘’We urge you to go on because of our future, and the future of our children. Remember you won and the delay that the outcome has imposed is only temporary.

‘’We are already looking forward, for in the future lies the realisation of our dreams of a greater nation.’’ Tinubu: Back Story and the Morning After
Leave a comment