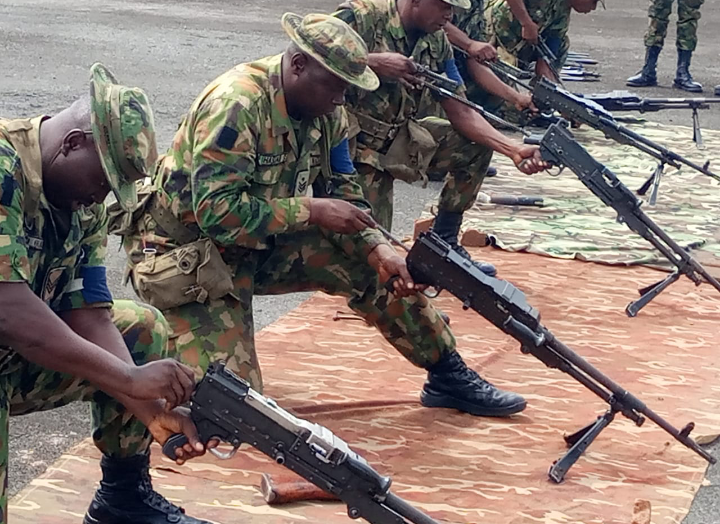 The Nigeria Army has promised to continue to train and re-train its personnel to enhance their combat-readiness.

Gen. Lagbaja who was represented by the Commandant of 13 Brigade Calabar, Brig. Gen. Everest Okoro, said that the Army would continue to prioritise training and professionalism.

His words: “This Division will continue to pursue its training schedules in order to perfect on current tactics, techniques and procedures and as well acquire new ones with a view to realizing the COAS Vision which is to have a professional Nigerian Army ready to accomplish assigned missions within a Joint Environment in Defence of Nigeria.

“In the last four days, we have witnessed passion, doggedness, dexterity, skills and professionalism from all the participants.

” This glamorous outing is in no doubt a culmination of hard work, discipline and resourcefulness put in at various levels of preparation by the various contingents.

” Purposeful training which is the bedrock of military professionalism was the catalyst to what we have witnessed during the competition. With this, let me remind all that, we must continue to train ourselves so that we can develop the required capability in our troops to handle every challenge thrown at them by the security dynamics.

“Therefore, the just concluded competition is not only timely but key in improving the combat readiness of our Warrant Officers and Senior Non Commissioned Officers in 82 Division.

The GOC commended participants at the competition especially those who won various medals while urging them to improve on areas of observed weaknesses and strengthen the areas of strength.

Various events where the participants competed on include: weapon handling, digital map reading and navigation, obstacle crossing, combat swimming, night and day firing among others.

The Golden spoon award for the best Brigade from the rear was collected by 44 Engineer Brigade Enugu. Our religion poisoned by toxic politics – Bishop Kukah
Next Article Tinubu to Buhari: I thank you for being neutral in APC presidential primary
Leave a comment