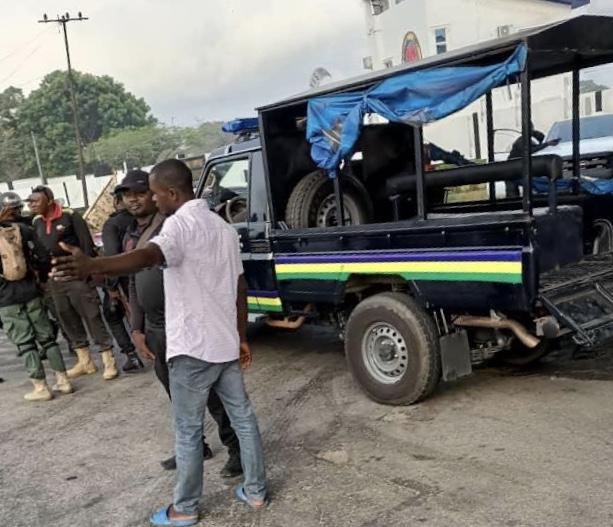 Fear gripped residents who apparently thought that the governor’s visit might end today’s sit at home.

However, at Eke Oko, an identified middle aged man wearing a police vest  with the inscription “Say No to Crime” and riding on a motorcycle, was shot dead by unknown person.

Some people in the area said the victim might actually not be a policeman, especially as the state Police Public Relations Officer, PPRO, Mr Tochukwu Ikenga said there was no report of the death of any policeman in the area.

The victim’s motorcycle was still lying beside him as people tried to identify who he is.

Also in the early hours of today, a section of Idemili North local government area headquarters, Ogidi was set ablaze by unknown arsonists.

While some people in the local government claimed that it was a fire incident caused by electrical fault, others said it was done by unknown gunmen.

No fewer than four official vehicles, as well as the Magistrate Court located inside the local government  and a building housing the Enugu Electricity Distribution Company (,EEDC) were burnt.

The state PPRO, Tochukwu Ikenga confirmed the Ogidi incident, explaining that the swift intervention of neighbours and police operatives quelled the fire. No life was lost.

Also on Sunday night, gunmen attacked military men and engaged them in a shoot out at 3-3 Estate, Nkwelle Ezunaka, near the city of Onitsha.

An eye witness said the shooting lasted several hours, scaring the residents of the area.

“After leaving our area, we started hearing gun shots at the nearby Government Reserved Area (GRA) in Onitsha”.

The state police command confirmed the Onitsha shooting, although no casualties were reported.

Meanwhile, the Monday sit at home was obeyed beyond imagination yesterday as even private schools that used to open in the past, ordered pupils who went to school to go home.

The streets of Awka were deserted more than the past few Mondays, as inter city transport was virtually not operating.

Most workers in the state were also absent from their duty posts, while the banks and shopping malls were closed.
The post BREAKING: Anambra boils as gunmen attack 3 locations appeared first on Nubunk News. Gunmen kill one in Akwa Ibom community
Leave a comment