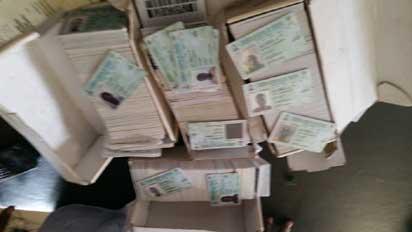 The campaign was initiated, in partnership with the Office of the lawmaker representing the District in National Assembly, Tokunbo Abiru.

According to the convener of LEPF, Abiodun Martins, the campaign which has been taken to streets and communities in all the 5 local governments and 11 LCDAs of the Lagos East District, was geared toward reawakening the people on their civic rights ahead of the 2023 general elections.

Martins, a former President of the University of Lagos (UNILAG) Student Union (ULSU) noted that the drive for registration of PVC was motivated by available data on the dearth of PVC in circulation.

Speaking at in Shomolu on Saturday, Martins said the LEPF would deploy team and other interest groups in ensuring that more people meet all the requirements to vote 2023.

He said, “We want larger percentage of Nigerians to determine who rules them. They should be part of the decision making.

Meanwhile, in his Democracy Day message, Abiru called on Nigerians to foster national unity, stressing that there is stillhope for the nation.

The Chairman, Senate Committee on Industries, noted that the great nations of the world that are celebrated today have had their fair share of national tribulations and challenges in their journey into nationhood.

He said, “I join esteemed constituents of the Lagos East Senatorial District and Nigerians in general in commemorating 2022 Democracy Day.

“No doubt, the democratic journey that started in 1999 is not without hiccups. The challenges notwithstanding, we should not be quick to dismiss commemoration of Democracy Day especially the tortuous June 12 struggle as non-event.

“Nations that are celebrated for their high democratic ethos today have had their own share of tribulations in their journey. The United States of America that is reputed as the bastion of the world’s democracy is obviously not without her challenges.”

The lawmaker added, “Despite imperfections and challenges, I urge all Nigerians not to despair but rather continue to seek ways of consolidating gains of the nation’s fledgling democracy.

“’As we get set for the 2023 general elections, I call on all eligible residents in the Lagos East Senatorial District in particular and Nigeria in general to register for their Permanent Voter Cards (PVCs) and ensure they discharge their civic duty during elections.

“Our challenges are daunting but not insurmountable. Let’s keep hope alive. Nigeria shall be great again,” he said.
The post Group takes PVC campaign to Somolu, Epe, Ikorodu appeared first on Nubunk News.