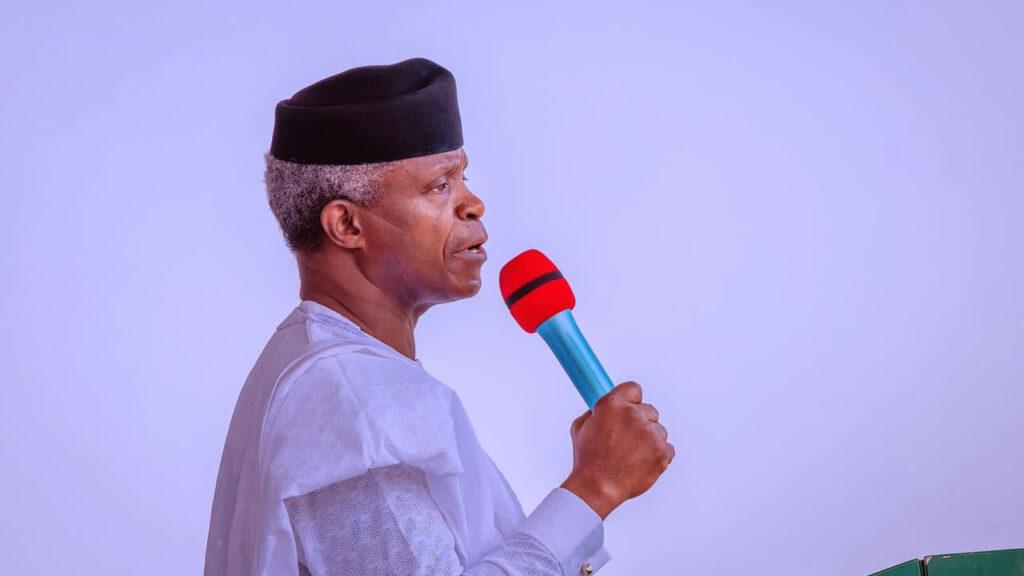 Vice- President Yemi Osinbajo says he remains committed to the dream of a new Nigeria despite the outcome of the just-concluded  All Progressives Congress (APC) Special Convention .

Osinbajo’s spokesman, Laolu Akande, in a statement on Friday in Abuja, said the vice president spoke during his visit to  the campaign office of The Progressive Project (TPP), a coalition of support groups that backed him for the presidency.

The vice president  also said that he would  support Sen. Bola Tinubu,  winner and flagbearer of the APC for the 2023 presidential election.

Osinbajo described the clamour for a new Nigeria as a movement.

“This movement is a movement within a party also, we are not doing something that has not been heard of before.

“What is new is that we have a firm belief that a new Nigeria is possible and it is possible through us who are here.

“We went to the convention, and the results showed us clearly that we lost, but it is only a battle, it is not the war.

The vice president said that despite the result of the APC presidential primary, the dream of a new country remained alive and well.

According to him, the resolve for a new Nigeria remains strong.

“We will have at the back of our minds, that what you have started in the various movements, coming into one, is the seed that will birth a new nation.

” You and I know the time has come and we will devote everything to it.

“As a matter of fact, the story has just begun, this movement has just started

” Once the genie comes out of the bottle, you cannot put it back; the word has been spoken; it cannot be taken back: it is time for a New Nigeria,” he said

He pledged support for the APC presidential candidate for the 2023 elections.

Osinbajo recalled the personal letter he wrote to Tinubu  Thursday congratulating him on his victory at the party primary.

“In that letter, I said to him that the dream of this country, the dream of a new country remains alive and well.

” And I want you to know in your hearts that we are democrats when we participate in a contest and the results are announced.

“And in that process, a winner has been adjudged, but that does not kill the dream of the great future. We will support our party; we will support the flagbearer of our party because we know that the other side is not even worth considering.

“So, we will support the flagbearer of our party, we will do everything we can,” he said.

He thanked  Nigerians at home and abroad, including the Osinbajo supporters’ groups, for the overwhelming support for his presidential bid.

Some leaders of Osinbajo Support groups lauded the vice president for being a true leader and inspiration to millions of Nigerians.

Dr Ahmed Badanga described Osinbajo as a role model to all.

“You are the Obama of Africa;  you have made us proud and we will continue to remain with you.

“Yes, we are progressives and we need to move forward. I will urge all of us to remain steadfast and be committed to this cause because we have a bright future ahead of us,” he said.

Hajiya Rabbi Dauda, leader of the Coalition of Women for Osinbajo, , declared the vice president  as a winner forever.

“Your Excellency, we, the women of Nigeria, find it worthy to stand by you.

“Anytime you need us, all you need to do is to call on us and we shall be there for you,”she said.

Another leader of a support group, Mrs Diana Mary, said that Osinbajo had set a path that would be followed.

“Your Excellency, you have led us to win, we are winners. We are not taking this for granted, you have led a direction that we will continue to follow and we are happy that for the sake of Nigeria you answered the call.

“I want to appeal that we still converge and speak about those things that we need to address so that we can pull a stronger force for Nigeria.

“This generation of Nigerians is looking for that force that will fight for their future,” she said.

The vice resident was accompanied on the visit to the Campaign Office by the senator representing Kano South in the National Assembly, Sen. Kabiru Gaya; Special Adviser to the President on Political Matters, Sen. Babafemi Ojudu; among other senior government officials.
The post I remain committed to new Nigeria project — Osinbajo appeared first on Nubunk News.