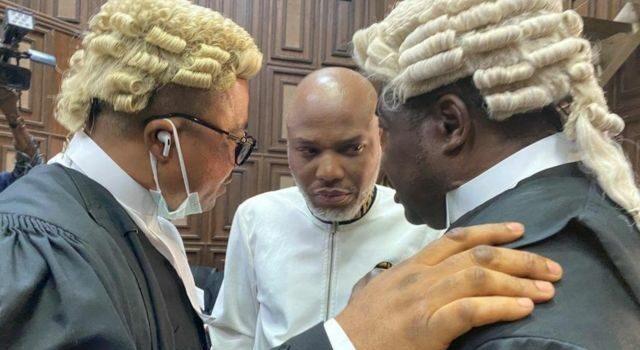 The detained leader of the Indigenous People of Biafra, IPOB, Nnamdi Kanu, on Friday urged his legal team to intensify efforts to see to the immediate release of Ukamaka Ejezie (Mama Biafra) who was allegedly detained by the Department of State Services, DSS.

Kanu made this statement in Owerri, through his lead counsel, Ifeanyi Ejiofor, after they had visited him (Kanu) at the DSS facility last Thursday.

To achieve this, the IPOB leader directed that all the legal parties should step up in the direction of ensuring she would be freed.

According to IPOB legal team, “Consistent with the subsisting Court-Ordered guideline, we visited our amiable Client – Onyendu Mazi Nnamdi Kanu, today. The fulcrum of our brief centred exclusively on our legal undertakings and prospects ofa positive outing on the next adjourned date, having reviewed the entirety of our legal strategies thus far.

“Onyendu was enthused with the news of seeming escalation in criminal activities in the south East and promptly directed for a sustained action towards total sanity on our land. Onyewu was delighted that UMUCHINEKEise is being vindicated by the startling revelations which are irresistibly exposing the strangers in our land, and their criminal gangs alike, who are kidnapping on our soil daily.

“Onyendu maintained that no son of the soil should pause until all forms of criminalities are eradicated from our land, he insisted that our land should no longer be a haven for those who kidnap for ransom, kill or indulges in any form of prohibited acts.

“Onyendu thanked ChukwuOkike Abiama for exposing these criminals behind the sacrilegious activities on our land and stressed further that there will be no hiding place anymore for these unscrupulous elements who are desecrating our land, hiding in bushes and arrogating the rights of landlords/overlords of our lands to themselves. He is profoundly pleased with the unprecedented success so far recorded in containing these monsters who have nothing/ no connection whatsoever with his freedom movement. IPOB has been vindicated!

“Onyendu commended Ezigbo UmuChineke for their solidarity, resoluteness and unflinching support. He continues to encourage you all to remain focused, calm and firm, as it is only a matter of time before this onerous path will be exited.”

On the call for the release of Mama Africa, the IPOB leader said: “Onyendu directed that all legal parties should be intensified to ensure the immediate release of Ukamaka Ejezie (Mama Biafra) is presently being held in solitary confinement by the state security service. Onyewu was however impressed with the extent of legal engagements aggressively being deployed to ensure that she regains her freedom within the shortest possible time. We are not relenting in our effort to see it happen, the same energy is also being dissipated to ensure the release of all IPOB members illegally arrested and still detained across the detention facilities of various security Agencies.

We implore you all to intensify your supplications and prayers, as it is impacting so positively UMUCHINEKE.”
The post Intensify efforts to free Mama Africa from DSS – IPOB leader, Nnamdi Kanu tells Legal team appeared first on Nubunk News. APC Primary: Fayemi denies stepping down for Osinbajo
Next Article