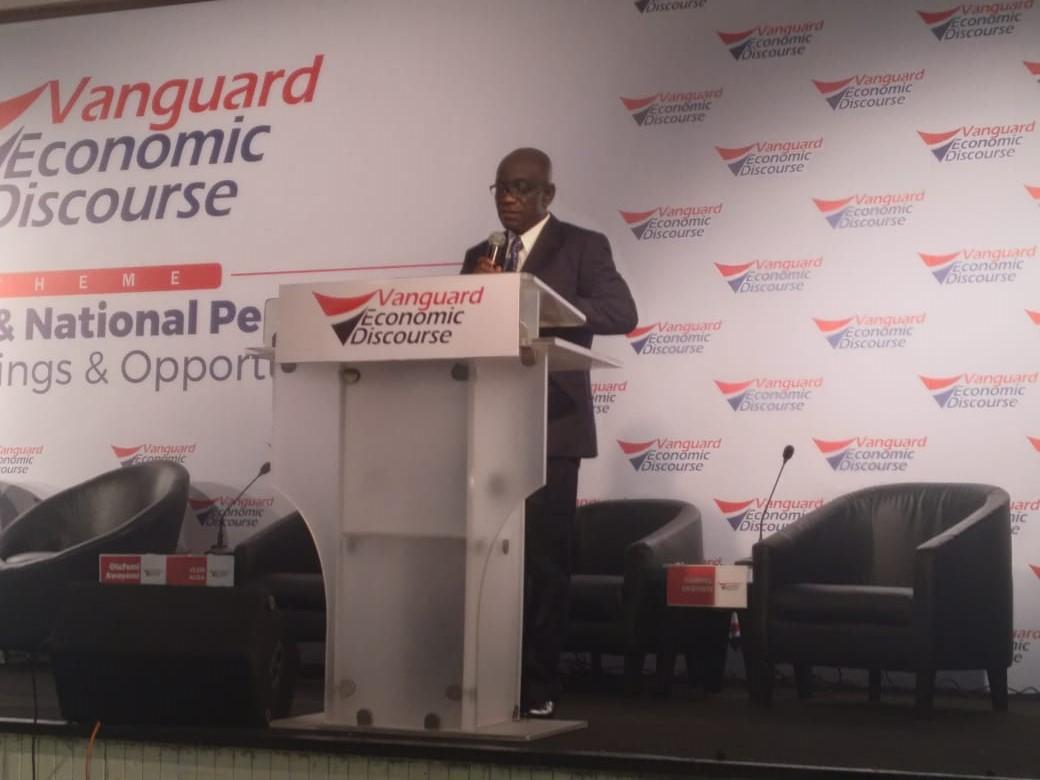 One of the panelists at the vanguard economic discourse, Professor David-west has harped on the need to look to technology to drive the transformation of the nations’s economy.

David-west noted that the technology has the capacity to transform th the ailing Nigerian economy.

According to David-west, technology brings about change and can help in the transformation of other sectors.

She said, “ we don’t need mere polices pronouncement, we need digital infrastructure to achieve a digital economy that works”.

Nigeria needs cheap labour to be a manufacturing Economy

A panelist at the vanguard economic discourse, Johnson Chukwu has revealed that cheap labour is the way to go if Nigeria must be a manufacturing economy.

He said a manufacturing economy enables job creation, and attract investors in all sectors of the economy

Chukwu who sites China and other fast rising Asian economies, noted that cheap labour would provide more employment opportunities to our teeming population and also attract investors into the country.

“If we must make our economy a manufacturing one we must consider cheap labour as a way to go.” He said

Nigerian Economy rigged into the hands of a handful of people, Peterside

Atedo Peterside, has claimed that The Nigerian economy has over time been handed over to a few individuals to manage.

The Chairman of the Occasion, noted that while other countries continue to grow, Nigeria’s economy remained stagnant.

He said “We need to sort out many things. As long as we allow a handful of people to rig the economy to their hands, we have nothing left and that is bad for our country.

“In Rwanda and Senegal, things are level but in Nigeria, it is not the case”

ECONOMIC PLANNING IN NIGERIA: AN APPRAISAL By AKPAN H. EKPO

The British Imperial power integrated the Nigerian economy into the global capitalist system long before political independence in 1960. The neo-colonial status of Nigeria did not change her economic relationship with the developed countries of Europe and North America.

For the most part, Nigeria remains an exporter of raw materials to industrialized countries and an importer of finished goods and services from the same sources.

In recent years, China has joined the club. All efforts to change the equation through policies and programmes have yielded marginal results; such efforts included planning the economy to enhance growth and other macroeconomic fundamentals.

Economic planning is a deliberate government attempt to coordinate economic decision making over the long-term and to influence, direct and in some cases control the level and growth of a nation’s main economic variables such as income, consumption, employment, investment, exports, imports, and population, among others.

An economic plan is a specific set of quantitative economic targets to be reached in a given period, with a stated strategy for achieving those targets. There is a theoretical basis for planning in all economies

An economic plan may be either comprehensive or partial. When it is comprehensive, the targets are set to cover all major aspects of the national economy – industry, agriculture, the public sector, the foreign sector as well as sub-sectors.

A perspective plan is a long-term (20-30 years or more) economic blueprint for an economy. The planning process is an exercise in which a government first chooses social

Planning and Governance: Evidence from Nigeria

According to the recently approved National Development Plan, government’s philosophy on development is stated thus:

“National development is the highest priority of the government. Government will unlock all constraints to ensure that economic growth is enhanced, inclusive and sustainable over the planperiod and beyond to generate employment and reduce poverty.

The role of the government will go beyond the normal provision of the enabling environment to include the qualitative participation in vital sectors of the economy that will open opportunities for the private sector to be a major engine of growth.

Consequently, the philosophy of the government is to work with all stakeholders within andoutside the country for the structural transformation of the economy in order to guaranteecontinuous improvement in the welfare and standard of living of all citizens.”