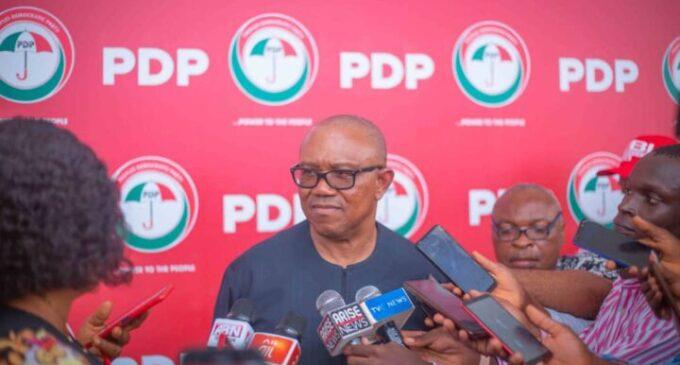 The Nigerians are airing their minds over the resignation of Peter Obi, former governor of Anambra and presidential aspirant, from the Peoples Democratic Party (PDP) on Wednesday.

Peter Obi’s decision to leave the PDP comes days before the party’s presidential primary is scheduled to hold.

Obi who announced his resignation on Wednesday in a letter addressed to the Party’s Chairman said recent developments within the party made it practically impossible to continue participating and making constructive contributions.

“Our national challenges are deep-seated and require that we each make profound sacrifices towards rescuing our country. My commitment to rescuing Nigeria remains firm, even if the route differs,”.

On Twitter, mixed reactions have trailed Mr Obi’s exit from the PDP with many dishing out what they believe is his reason, the way forward or a possible ripple effect.

Here are some reactions gathered:

@firstladyship, “Peter Obi will defeat the PDP and the APC in any party. The Office of the citizens of Nigeria is the highest office in the land. This organic support has taken off. They can no longer stop us. Only God can. Obi is an idea whose time has come. The gang up against him won’t stop us.”

@Renoomokri“Did I not say it? If PDP had fielded @PeterObi, they would have LOST big time. His online followers made him too toxic in every region except the Southeast. They know themselves. Insulting and threatening. As if only their votes could have made him President!” Omokri wrote.”

@chizchio1, “When he #PeterObi said, ‘even if I lose at PDP primaries it doesn’t stop me from contesting for president,’ dey did not get the point, We don’t play politics of sharing money. Nigeria must be great again.”

@YarKafanchan “He wasn’t going to win. This is a fierce battle. He was a lovely candidate and bless your hearts for standing by him. I am in full support of young people supporting Peter Obi and I will continue to egg you people on. Goodluck everyone.

Obi to PDP delegates: Vote for your children’s future, not moneyMay 17, 2022Updated: Happenings in the party not encouraging, says Obi as he dumps PDPMay 25, 2022PRESIDENCY: PDP’s aspirants ready to accept consensus candidate — SarakiApril 13, 2022

@Yumilicious, “What Peter Obi just did today has just placed him on another level of political recognition and trust. Some of us were skeptical about having PDP coming back to government. So now that he has emancipated himself from them, we Move.”

@chosensomto, “Peter Obi’s exit from PDP is a sad development; this NWC obviously can’t handle a fair presidential primary election. An aspirant leaving the party just a few days to the election? Terrible signs and optics. Sad day for PDP, maybe the party is not ready after all.”

@jaustineuche, “The lingering and unresolved crisis in Anambra State PDP chapter may have led to Peter Obi resigning from the party.”

@PoojaMedia “Peter Obi has seen the light that when it comes to buying Delegates, he cant stand some aspirants & if he tries to go that route, it will stain his “uprightness” For him to win from another party apart from the 2 biggest ones will be a miracle. Presidential dream over?”

@offcial_ee90, “Just my concerns (fears) now that He Peter Obi left PDP, if he decides to run as an independent candidate,in another party, he will only succeed in wasting the votes of many Nigerians thereby making it easier for APC to win the general election.”

@udochukwuokenwa, “Any Political Party Peter Obi joins, I’ll follow him to the place.

“If he decides not to run again, I’ll not vote. It is my personal decision. Let whoever that will win win and whether the person performs or not, it is all of us that will enjoy it.”

@ChimozukyI hope this Peter Obi wave is not just a twitter thing. Please let it not end here. Speak to people around you. Educate them on why we need a sound mind like Peter Obi to be our next president.”

@westkal22,”@OfficialPDPNig should watch and see how rapidly we’re going to decimate their relevance here. Wherever @PeterObi goes, we go. Aggressive campaigning and push now. All hands must certainly be on deck.”

@aplha_kingdom, “I told y’all Peter Obi stands no chance. You said I know nothing about politics. Now see the coward you were all supporting.”

However, as the time of filing this report, PDP is yet to react to Obi’s resignation from the party.