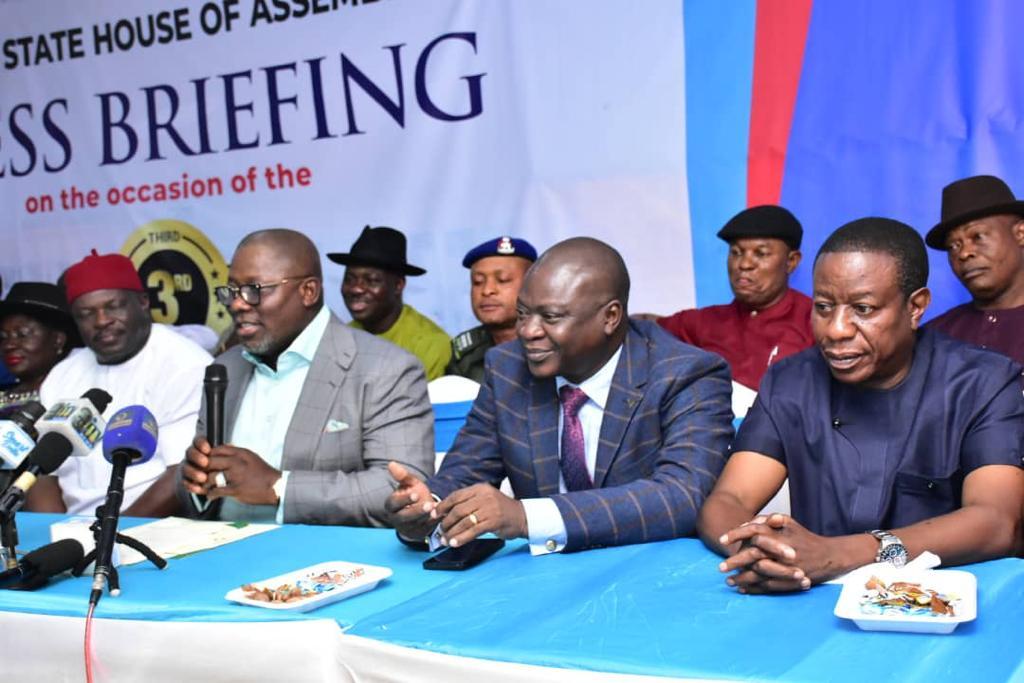 Right to left: Deputy Chief Whip of Delta State House of Assembly, Chief Solomon Ighrakpata, Majority Leader of the House, Chief Ferguson Onwo, Speaker of the House, Chief Sheriff Oborevwori and his Deputy, Chief Christopher Ochor just after the media briefing to mark the 3rd Anniversary of the 7th Assembly of the House in Asaba, Friday.

SPEAKER of Delta State House of Assembly, Rt Hon Sheriff Oborevwori, Saturday, said that Governor Ifeanyi Okowa’s strict adherance to the principles of seperation of power was integral to the relative peace, security, socio-economic and infrastructural development being witnessed in the state.

Oborevwori who stated this in Asaba, at a press briefing to mark the 3rd anniversary of the 7th Delta State Assembly, hailed Governor Ifeanyi Okowa’s commitment towards the principles of separation of power and pledged sustainable synergy between the State Legislature and other arms of Government in the State.

He maintained that the Governor’s position was part of what made the State one of the first States in the country to implement financial autonomy for the three arms of Government.

Giving a breakdown of the State legislature’s achievement in the past one year, Oborevwori disclosed that the House received a total of 25 Bills. He explained that out of the 25 Bills, 15 were  Executive while 10 were Private Members’ Bills.

Saying that 21 bills were passed; 16 assented to by the Governor, six awaiting assent and three are still undergoing consideration by the House, the Speaker who was flanked by Principal Officers of the State Legislature and other lawmakers,

said the House within the period under review, approved 85 motions and resolutions.