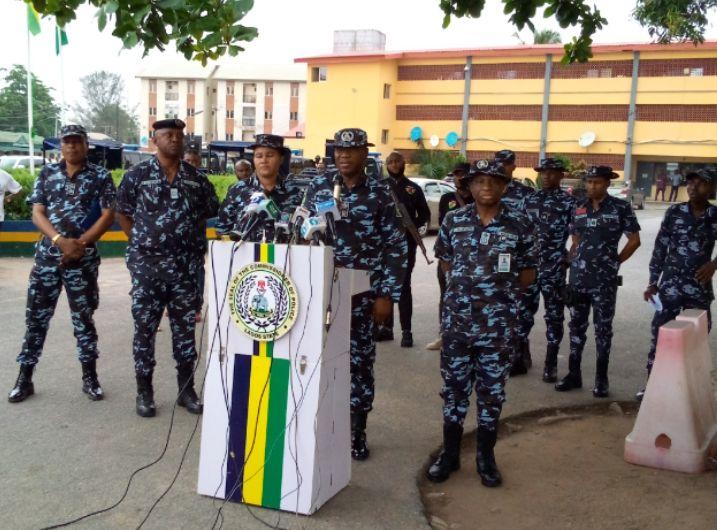 The Police Command in Lagos State on Friday said that it arrested 13 suspected criminals in the last one month in the state.

The Commissioner of Police (CP) in Lagos State, Mr Abiodun Alabi, said this while briefing newsmen on activities of the command in the month under review.

Alabi said among those arrested,were six commercial motorcyclists, popularly called Okada riders, who were allegedly involved in the gruesome murder of  a Sound Engineer, David Imoh, in the Lekki area of the state.

“In the heat of the argument, the Okada man and his cohorts violently attacked David Imoh, killed him, and set his remains ablaze.

“A total of six suspects have been arrested and the suspects will be charged to court at the conclusion of investigation,” he said.

Alabi said that within the same period under review, operatives of the command also arrested three other suspects for allegedly and unlawfully  being in possession of guns.

He said “On 23rd of April, 2022, a member of the public, who resides in Ibeju Lekki area of Lagos State went to receive food items sent to him by his mother from Cross River.

“When he opened the sack, he discovered seven locally-made pistols concealed inside it.“He rushed to the nearest police division and handed over the arms.

“Upon receipt of the case, detectives embarked on diligent investigation that led to the arrest of the driver, who dispatched the sack from Calabar to Lagos,” he said.

The police boss said that during interrogation, he confessed that he had sold many guns to his customers in Lagos and later led operatives to arrest two of his alleged buyers.

According to Alabi, “one locally-made shot gun bought from the driver was recovered.

“Investigation is still ongoing while efforts are on to apprehend other fleeing suspects in order to recover more of the guns he had sold to them in Lagos,” he added.

The CP also disclosed the arrest of four other suspects ages: 28, 19, 15 and 25 who were alleged to have being in possession of firearms.

He said that on 10th May, at about 9.15 a.m, a team of detectives from the command headquarters arrested some armed robbery suspects in their hideout situated around Ojo area of the state and recovered guns and ammunition from them.

“Investigation is ongoing to apprehend other fleeing suspects in connection with this case and to recover more arms and ammunition,” he said.

The police boss said that a suspected cult member was arrested for killing one Adesegun Adesanya, a.k.a. Ologodudu.

According to him, “On 21st Feb., a cult member (name withheld) and other members of his group went on a reprisal mission to avenge the deaths of their members, and killed one Adesegun Adesanya, a.k.a. Ologodudu.

“Upon receipt of this information, detectives tracked down the suspect to his remote stronghold where he was apprehended.

“During investigation, the suspect made a confessional statement about the said crime.

Alabi said that investigation was still ongoing to apprehend other fleeing suspects in a bid to recover their operational weapons.

He assured people of the state of the command’s readiness to protect lives and property of residents.
The post Police arrest 6 suspected killers of David Imoh, 7 others in Lagos appeared first on Nubunk News. Court sentences Dane to death by hanging for killing his wife, daughter
Next Article Root for me instead of Bello, others, Amaechi tells Kogi APC delegates
Leave a comment