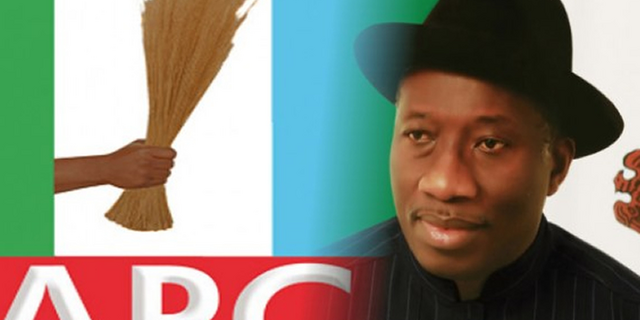 …North prefers him to other APC contenders, says a source in GEJ’s camp

Contrary to reports that immediate past president, Dr Goodluck Jonathan, is out of the race for the presidential ticket of the ruling All progressives Congress, APC, because he did not submit his nomination form, Vanguard gathered yesterday that he is still in the race.

Sources said he submitted his expression of interest and nomination forms to the party. However, party leaders could not confirm, yesterday, if he has left the Peoples Democratic Party, PDP, for the APC.

Some leaders of the PDP, led by Governor Samuel Ortom of Benue State, early in the week, met Jonathan to convince him to remain in the PDP and attend the party’s presidential convention on Saturday.

The move to include Jonathan in the race, sources said, last night, was partly responsible for the much-postponed screening of APC presidential aspirants.

Apart from the issue of raising a seven-man screening committee to be chaired by the National Chairman, Senator Abdullahi Adamu, the panel has to be given a list of aspirants to be screened.

It was also gathered that the bid by some powerful Northern political leaders to draft Jonathan into the presidency of Nigeria in 2023 is gaining momentum, with the endorsement of the idea by a cross-section of Northern political stakeholders.

Vanguard however learned last night that although the idea has been pushed to President Muhammadu Buhari by his henchmen, he has neither rejected nor openly endorsed it as of the time of writing this report.

Jonathan cannot contest under the law in Nigeria2023: The monumental shaming of Jonathan, Emefiele2023: Jonathan’s possible defection to APC, mirrors politics without principles

A source close to Jonathan’s camp confirmed to Vanguard that the bid by Jonathan to fly the APC flag in the 2023 presidential election is on the course but declined to give details of the process and who the promoters are.

The source was confident that barring any unforeseen political development, Jonathan might emerge the consensus candidate of the APC and win next year’s presidential poll with a wide margin.

The former president is said to have made some contacts with some powerful persons close to the president, who are also pushing the agenda to secure him the APC ticket.

The source said: “There have been a series of political stakeholders’ engagements and many more are still being held in a bid to finalise the details of the process and we are confident Jonathan will emerge the candidate of the party.

“Although there have been some back and forth developments relating to the project, there is clear hope now since the necessary contacts have been made and are still being made to advance the cause of the former Nigerian leader.

“The former president is likely to get the ticket of the APC largely because the majority of the stakeholders and supporters of other presidential aspirants are on his side, having seen and known that their principals will not be able to make it.”

Why North is rooting for Jonathan

Giving further insight into why the North is rooting for Jonathan, the source said the former president is seen as a trusted ally of the region, given what he did for them when he was in power and that he is possibly going to pick a Northern Muslim as his vice, as opposed to a leading aspirant from the South-West, who would likely choose a Christian vice president.

Reminded that the President might prefer his vice who has worked hard while remaining loyal since their journey began in 2015, the source said the sacking of two trusted allies of Buhari, including former DSS DG, Daura Lawal, and the former SGF, David Babachir, while the vice president held sway, was not pleasing to the president and might count against him.

“The core North has not forgiven Osinbajo for these gaffes and the president is still relating well with these people, even while they are outside the corridors of powers,” the source stated.

It is not clear how the former president will emerge as the consensus candidate of the APC, given the fact that he was upset that a group of Fulani cattle dealers bought him the nomination form without informing him.

It was also unclear last night if the form was submitted to the APC secretariat before the close of nomination.

Why Jonathan is still in the race

Another source told Vanguard how and why Jonathan is still in the race.

“They (Presidency Cabal) persuaded him that he is the chosen one. He got the nomination form but when he could not get any guarantee from President Buhari, he hesitated.

‘’The party created room for those who collected the forms late to fill and submit. Jonathan took advantage of the window and submitted the forms.

“The cabal persisted. All sorts of stakeholders’ meetings were held to convince him he is the chosen one. He told his associates that he is discussing with them but wants to get a firm assurance from the President.

‘’Clearly, it is either the President or the cabal who convinced him to run. That is one of the reasons delaying the screening of the presidential aspirants,” the source said.

Can Jonathan run on the platform of the APC without joining the party?

As of now, the issue of whether or not Dr Jonathan is a registered member of the APC is still unclear.

Attempts to get the response of Ogori Freeman, APC Ward 13 chairman, Otuoke, Jonathan’s hometown proved abortive but a kinsman of the former president, Engr. Mike Ogiase, simply said, “at the appropriate time, everything will unfold. The country will know the true position.”

Also, Bayelsa State chairman of  APC, Dr Dennis Otiotio, who spoke with Vanguard on the telephone, said he was not in Yenagoa and was not in possession of the party register to know if the former president had registered with the party.

His words: “I’m not in Yenagoa now, I am in Abuja. So, I may not be able to confirm anything. As I am talking to you now, I will not know until I get back to Yenagoa to check the register before I can confirm whether the former President is registered or not.”