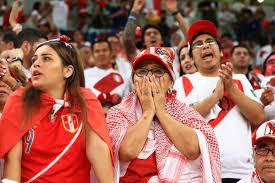 ‘Sometimes, football can be cruel’, Agu Lesley of Kick442.com,’ said at the breakfast table in Marriot Hotel this morning.

The young and enterprising sports journalist from Cameroun was referring to the atmosphere at Ahmad Bin Ali Stadium Monday night when sentiment gave way to reality. People left the stadium with long faces.

Their sentiment was for Peru who were, on paper, favoured to qualify for Qatar 2022 final here in November, this year. Australia proved them wrong. Peru won the hearts of fans here with their outstanding display of what Duro Ikhazuagbo of Nigeria tagged ‘rich football culture’.

Their fans kept the stadium alive for 120 minutes the World Cup qualifier lasted before the penalty kicks. They drummed, sang, danced, produced some high pitched music that swayed hearts and eyes to the section of the stadium they occupied. 12,000 peru fans had landed here in Doha to ensure a historic consecutive World Cup qualification.

Back home in Peru, their government declared a public holiday so that people who could not find their way to Qatar would watch on television. That’s how serious they take football. They were a spectacle. They were noisy but entertaining.

They occupied one section of the stadium but their music seized all parts of the stadium and fans willingly and excitingly joined their party. Sometimes the drums ceased but momentarily for a melodious song to rent the air. And what followed was an orchestra of very loud drumming, trumpeting, singing that other fans including the Aussies couldn’t help gyrating in line with their rhythm. Everybody imagined what they would engender in November if they could do this in a qualifier. Fans gave in to sentiment and rooted for them. People wanted them to win and return to be part of the carnival in November.

Qatari people would be happy to see the show they put up in greater dimension. Peru fans thrilled everybody. Emotions got the better part of them. But ironically the players on the pitch couldn’t match the performance of their fans. From the early minutes the Socceroos defied the loud cheers of Peru fans and controlled the game better. They looked more organised defensively and they made incursions into vital areas of Peru. Buoyed by their fans Peru charged everywhere but were not particularly deadly.

They enjoyed greater possession but Australia appeared better tactically. They were organised and showed it with their touches. ‘I think they are are better coached,’ Lesley said of Australia. Peru fans continued to electrify the atmosphere, definitely doing better than their players. First half ended goalless and so did the full time. Two minutes to full time, Australia changed their keeper.

Andrew Redmayne came in. Tall, lanky and confident, he mounted the stage during the shoot-out, started dancing along the goal line when kicks were about to be taken. One kick hit the upright and he saved the last kick after Australia missed the first kick and appeared to be losing out until Peru missed one through Adrin. Australia eventually won 5-4 and hisses rained. The stadium went dead as Socceroos celebrated on the pitch. People left the stadium quietly, full of pity for Peru.

There were emotions but the reality was that Peru excited through their fans but Australia got the result that mattered. And when the World Cup begins on November 21 this year, Australia will be in group D with Denmark, France, and Tunisia.

In few hours, New Zealand will be battling Costa Rica for the last spot in the 2022 World Cup that promises to be the best World Cup ever.
The post QATAR 2022: Emotions as Peru excite on the stands, lose to Australia on the pitch appeared first on Nubunk News.