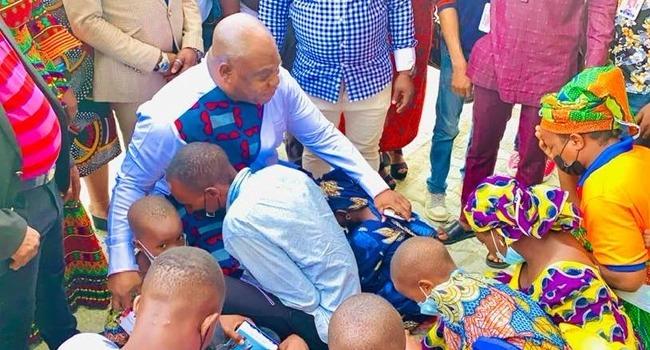 When a group of Islamic extremists mobbed and burnt Miss Deborah Samuel, a 200-level student of Shehu Shagari College of Education, Sokoto over the alleged blasphemy of Prophet Mohammed, the nation was agog with mixed reactions. While some  extremists remained unrepentant about the fate that befell her, Christians and other people of conscience condemned the killing.

The Christian Association of Nigeria, CAN, even mandated churches and organisations to stage public protests after service the following Sunday. After all the hoopla, everybody went indoors and left Deborah’s bereaved family to its fate. Even the Governor of Sokoto State, Alhaji Aminu Tambuwal, who was expected, as a budding national leader, to offer some succour to the family, failed to do enough to bring the culprits to justice. All that was done was to charge the two persons seen in the viral video for “incitement to riot” instead of “conspiracy and murder”.

In a heart-warming departure from the norm, the Founder of Port Harcourt-based Omega Power Ministries, OPM, Apostle Chibuzor Chinyere, demonstrated genuine love and empathy towards the family of the deceased. Deborah, the first of eight children, left behind her parents, Mr. and Mrs. Samuel Yakubu, and her siblings – nine in all.

After Deborah’s rushed burial, Apostle Chinyere, who had vowed to rehabilitate this poor family, made good his pledge and brought them from their village in Tungan Magajiya, Rijau Local Government Area of Niger State to Port Harcourt in Rivers State.

He donated a fully furnished, newly-built house, 14 mini-flats and a car for Uber commercial operations. The family was spotted dining in a comfortable home which contrasted starkly with the hovel they were used to back home. The Apostle gave them back their life and humanity, thus immortalising Deborah in their hearts and those of people of goodwill in ways that her killers never envisaged.

We commend Apostle Chinyere and his partners in the Church who made this possible. According to the cleric: “We all need the love which is the primary thing in life. There is no need to kill ourselves because we are all created by God, whether Muslim or Christian”. This exemplary cleric has proved love beyond lip service. He has given all of us a good lesson to emulate if we must co-exist happily and harmoniously in Nigeria.

We, however, plead with members of the public, especially public-spirited and advocacy groups, to continue from where Apostle Chinyere has stopped by offering mentorship to the Yakubus. The parents have just been given a big fish beyond their wildest dreams. They need to be taught how to fish in order to make their blessing permanent.

They need further guidance to enable them adjust suitably from grass to grace.
The post Rehabilitation of Deborah Samuel’s family appeared first on Nubunk News.

Okada ban by Lagos govt and matters arising
Next Article