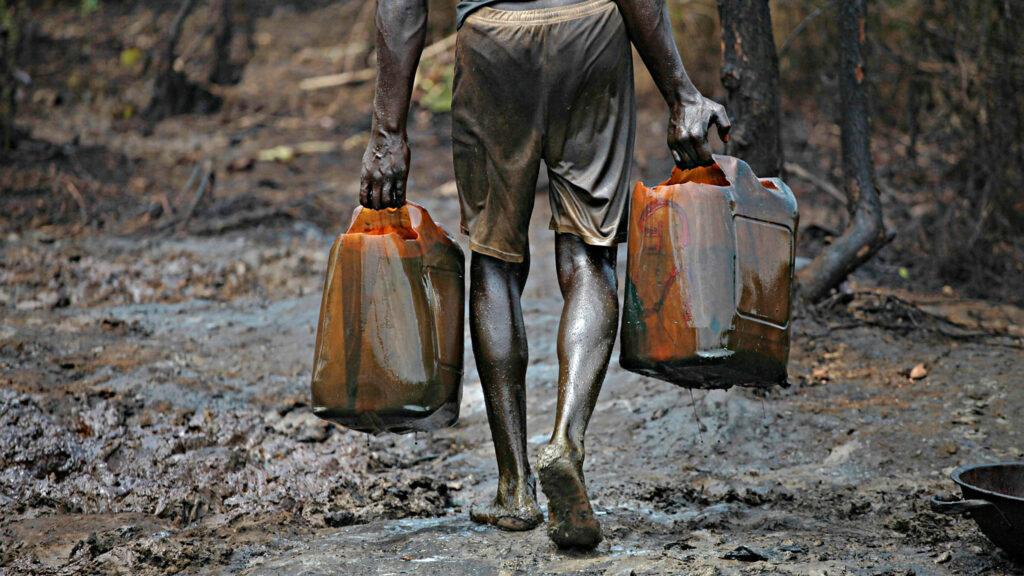 THERE are indications that despite the rise in crude oil prices in the international market, Nigeria’s economy may not reap the benefits due to the continued increase in theft and pipeline vandalism estimated to have gulped 73 million barrels a year.

Investigations by Sunday Vanguard revealed that the country loses about $7.3 billion a year to oil thieves and vandals. The situation is made worse by the country’s inability to meet the Organisation of Petroleum Exporting Countries, OPEC’s production quota of 1.8 million barrels per day which resulted in the Federal Government recently announcing a reduction in her export target to 1.6 million barrels per day while other countries in the cartel are striving to exceed their quota.

According to the GMD, Nigerian National Petroleum Corporation (NNPC), Mr Mele Kyari, the country loses an average of 200,000 barrels of crude per day to oil thieves, translating to 73million barrels in a year. Using an average crude oil price of $100 per barrel, Nigeria is losing over $7.3 billion in a year or in five years (between 2016 and 2020) an estimated $14.65 billion considering the cost of oil per barrel at the years under review.

The amount, when converted using the official N416.25 to dollar exchange rate, translates to N3.038trn loss in a year. Data from the latest report by the Nigeria Extractive Industries Transparency Initiative (NEITI) Oil and Gas Industry showed that 272.2 million barrels (mmbbls) of crude were lost to oil theft and other forms of criminalities in Nigeria’s midstream sector.

The issue of crude oil theft and sabotage has become endemic despite several initiatives and recommendations made by oil and gas experts to curb the menace. Worse still, the implications surpass losses to government revenue extending to environmental degradation, health challenge and deaths due to fire disasters including the proliferation of arms as the case may be.

Nonetheless, the losses defer from situations where oil companies are unable to produce at a particular period due to time spent repairing vandalised pipelines or leaks, often described as deferment. This development has cost the country’s economy a lot as some major multinational oil companies operating in Nigeria have linked their divestment in many onshore assets to the continued oil theft in the country.

On OPEC’s quota, despite its requirement of 1.8 million barrels from Nigeria, in the last few years, the country has struggled to produce between 1.3 and 1.4 m/d. In January it recorded a 1.399 million barrels production level, 1.258m/d production in February, dropping to 1.238 million in March.

A report released last month during a meeting on crude oil theft between the Nigerian Upstream Petroleum Regulatory Commission and Oil Producers Trade Section, as well as the Independent Petroleum Producers Group, shows that between January 2021 and February 2022, Nigeria lost $3.2bn to crude oil theft.

The report reveals that oil theft rose significantly between 2021 and 2022, with over 90 percent of total crude produced at the Bonny Terminal stolen in January 2022.

Meanwhile, critics have faulted these figures, saying it is an attempt to cart away the country’s crude under the guise of oil theft. Contrary to the acclaimed huge losses of over 80 percent painted by operators in the petroleum industry, the Federal Government, according to them, has, through the Nigerian Upstream Petroleum Regulatory Commission (NUPRC) revealed that Nigeria loses only 7.6 percent and not 80 or 90 percent of its net crude production daily to oil theft and vandals. The Commission’s Chief Executive Officer, Gbenga Komolafe, warned that such unsubstantiated figures could encourage falsification of figures by producers and industry regulators.

Komolafe’s statement appears to be in direct response to the critics including Mr Tony Elumelu, Chairman of UBA Banking Group and Heirs Holdings, who had raised the alarm that Nigeria was losing over 95 percent of its daily crude oil production to oil thieves, while Austin Avuru, founding MD/CEO of Seplat Energy, on his part, claimed that the country loses about 80 percent of production to vandals and thieves.

The NUPRC boss explained: “The country’s total daily production currently stands at 1.5 million barrels and with losses of about 115,000 barrels per day ($3.27 billion) to oil theft and vandalism between January 2021 and February 2022. “This calculation was based on the Commission’s Investigative Audit recently conducted.

The country loses only 7.6 percent of daily crude oil production contrary to figures being credited to some industry operators by the media. “So, if we cannot establish the absolute figures of crude oil theft forensically, then it means the nation will be shortchanged.”

By implication, the country loses about 7.6 percent of the current 1.5 million barrels of crude produced per day on average. Therefore, if 80 percent of Nigeria’s crude oil is stolen as claimed by some operators, that means Nigeria produces about 300,000 bpd whereas regulators put the daily output at 1.5 million.

Executive Secretary, Nigerian Content Development & Monitoring Board, NCDMB, Simbi Wabote, says the security of local content is of paramount importance because it contributes to the total cost of the product which is already in competition with other producers of the same content.

While the NNPC GMD, Kyari, admitted that there are some challenges facing the operations of the corporation, particularly as they relate to pipeline vandalism and crude oil theft, this, he said, has reduced crude oil production to about 1.5 million barrels per day.

He, however, said that, currently, the crude oil production challenge is being addressed through collaborative efforts between the NNPC, other agencies of government and security agencies. Specifically, he said that the Nigerian Navy is carrying out serious military operations in the Niger Delta to ensure that oil and gas assets are protected.

Kyari expressed optimism that, with the current action of the navy, the issue of pipeline vandalism and crude oil theft will be brought under control within the next two to three weeks. Supporting the stand of the NNPC boss, Timipre Sylva, Minister of State for Petroleum Resources, said the Federal Government will no longer condone any form of criminality on the nation’s oil and gas facilities and installations.

He warned crude oil thieves, pipeline vandals and illegal refiners to desist from their actions as their days are numbered.

While much blame for these acts have been ascribed to the high rate of unemployment and poverty in the country, internal sabotage has not left the fore of suspicion.

In an interview with Sunday Vanguard, the Ghana National Petroleum Corporation (GNPC) Professorial Chair, Oil and Gas Economics and Management, Institute for Oil and Gas Studies, University of Cape Coast, Prof. Omowumi O. Iledare, said: “Perhaps, unemployment, greed, lack of respect for the rule of law and nfrastructure deficiency make legitimate business difficult. “These, however, are no excuses for criminality.

“The main solution is enforcement of the rule of law, accountability and withdrawal of emoluments to community found liable. “No society can thrive if criminality is perpetuated without recourse. “Yes, corporate social responsibility helps, but there must be community accountability. Rewarding criminality perpetually breeds more criminality.”

A report titled ‘The Oil Thieves in Nigeria’ is apt to ascribe the lack of political will of the Federal Government to reasons for the persistent crisis of oil theft. The report says, “In September 2021, the Federal Government decided to set up an inter-ministerial committee on the recovery of crude oil and illegally refined petroleum products in the Niger Delta region comprising the Department of Petroleum Resources (DPR), the Nigeria National Petroleum Corporation (NNPC), the National Oil Spill Detection and Response Agency (NOSDRA), all backed by the security agencies – the Nigerian Army, the Navy, the Nigeria Security and Civil Defence Corps (NSCDC) and others.

“The committee’s mandate is drawn from the provisions of the assets tracing, recovery, and management regulations 2019. Yet, by the end of the year, 193 million barrels of crude oil had disappeared and certainly, that must be an under-valuation, an estimate.

“It is well known that there is no proper documentation of anything in Nigeria. We don’t even know how many we are. The National Population Commission (NPC) has no accurate register of births and deaths. Should it, therefore, be any surprise that there is no mechanism in place for monitoring how many barrels of crude oil Nigeria produces or the exact volume of it that is sold?

Three years ago, there was some fancy talk about the introduction of technology to monitor output and activities along Nigeria’s oil pipelines network to detect sabotage, and human interference and to protect critical infrastructure.

Oil was discovered in Nigeria, in Oloibiri, Bayelsa state in 1956. “In 2022, Nigeria is still talking about how to protect pipelines through the adoption of technology. Even if technology is deployed through automation, the internet of things, drone technology, and the electronic monitoring that certain commentators recommend would still be an excuse to award contracts and make more money.

Whatever works in other countries, Nigeria takes the same ideas and turns them upside down. “The people who want to stop oil theft are not interested in stopping anything, so it seems, for indeed, oil theft is an organised crime, with a network of stakeholders that cuts across many layers of interest. And that includes the same agencies saddled with the responsibility to stop it.

“Illegal oil bunkering: hot tapping or cold tapping, or the smuggling and diversion of petroleum products is an expensive enterprise that involves the collusion of both state officials and their agents. It may not be incorrect to argue that nothing has been done because those who should take the decision or their agents are themselves involved, or they have been compromised.”

Similarly, Nigerco Nigeria Limited had stated that Nigeria has been losing about $8 million to poor metering of oil wells. The Chairman, Chief Executive of the company, Yussuf Sani, who spoke to Sunday Vanguard, said Nigeria, in the first quarter of 2015, made over $8 million as part payment for monitoring and licensing fees from oil firms.

Sani noted that the $8 million was the minimum the nation should have made quarterly following the commencement of the scheme. But the dispensation was discontinued after only being operated for one quarter, implying that Nigeria could have, in the past two years, earned a minimum of $64million. As things are, the quest to rid the country of this cankerworm may be far from reality as political will is missing.
The post Scandalous Oil Theft: Nigeria loses N3.038 trillion in one year appeared first on Nubunk News. Dangers of partisan politics in government service
Leave a comment