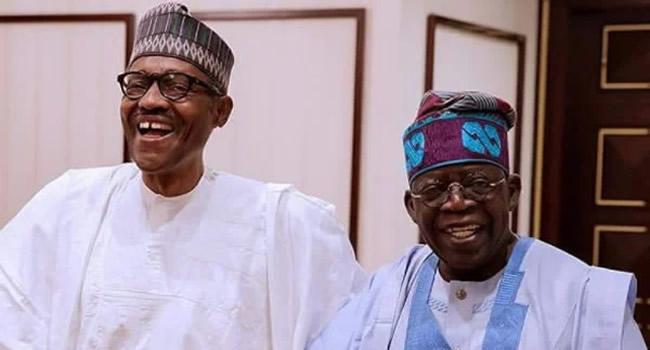 •’We pleaded with president to choose successor’

By Johnbosco AgbakwuruThe presidential candi date of the All Progressives Congress, APC, in the 2023 election, Asiwaju Bola Tinubu, has revealed how leaders and presidential aspirants of the ruling party pleaded with President Muhammadu Buhari to choose his preferred aspirant for the presidential primary.

Tinubu, in an appreciation letter to Buhari which he personally signed, thanked him (Buhari) for being neutral throughout the presidential primary to select the APC flag bearer in the 2023 election.

In a statement by the Special Adviser to the President on Media and Publicity, Chief Femi Adesina, the APC national leader said  he would ride on the legacy of the President to give the party victory in the forthcoming election.

He described the President as a true leader, brother and friend who demonstrated a sense of purpose, composure, and maturity in the weeks leading to the Special Convention of the Party.

The nominee expressed gratitude for the President’s congratulatory letter to him, and for allowing a level-playing field in the process to choose his successor.

“Your Excellency, one must admire the sense of purpose, composure, and maturity you demonstrated in the weeks and months preceding the primary elections of our great party.

As aspirants and party leaders, we all pleaded with you to ‘choose’ your successor”, Tinubu said.He continued: “Naturally, this is expected especially in African democracy.

Up until the 6th of June, 2022, the day of the APC Presidential primaries, the whole of Nigeria, including myself, was waiting for you to announce your preferred candidate. All of us thought and believed this was a very simple matter.

“However, it was only as the primary went into the night and as the aspirants walked up to the podium and spoke that I fully and truly appreciated your position and stance to be neutral and non-aligned to any of us.

As the first person to speak, I also had the special vantage point to carefully hear, without any distraction, what the other aspirants had to say.

“As the hours rolled by that evening, it became clear to me that all of us were your preferred candidates.

“In your letter and in our many meetings over the years, you fondly reminisced on fraternal attitude in the days and months before and after formation of the APC, when we all worked day and night to create, sustain and nurture our nascent movements into a credible opposition party and ultimately, become the ruling party.

We were driven by a common desire to save and transform Nigeria.

“One by one, I saw my colleagues and partners stand on the podium, full of the same passion and patriotic zeal they had in 2013/2014, presenting their ideas on how to build on your successful legacy.

Back then, as it is now, we were from all parts of the country, all tribes, and all religions.“We all had deep personal and strong bonds with you.

We were together back then and our bonds remained strong up till now.

“Mr. President, as the night of 6 June turned to morning of 7 June, I fully understood and appreciated your stance.

“Mr. President, the delegates from all over the country nominated my humble self to be their candidate.

I must acknowledge that my nomination would not have become a reality without your support and that of the party leaders across the country.“

Indeed, as I reflect on my political journey, most of the 2022 APC presidential aspirants, members of the Progressive Governors Forum and National Assembly leaders and members all had a role to play in my successes and achievements thus far.“

I will forever be grateful to them for shaping my political journey over the decades.

I want to assure you that I will continue to work with them going forward. My emergence as a candidate is also a victory for them.“

“I have taken note of the message you sent to all Presidential Candidates in your Democracy Day speech to the nation on the 12th June, 2022.

Our country is going through a very sensitive period and no one should put their personal desires above and beyond the nation’s peace and prosperity.“

As you said, the “message we set at the top will be replicated in our followers.”

At this point, I will take this opportunity to assure Your Excellency of my commitment to running an issue focused campaign as we move into the general elections”.
The post Tinubu to Buhari: I thank you for being neutral in APC presidential primary  appeared first on Nubunk News. ELECTIONS 2023: From reptilian politics to a peoples movement
Leave a comment