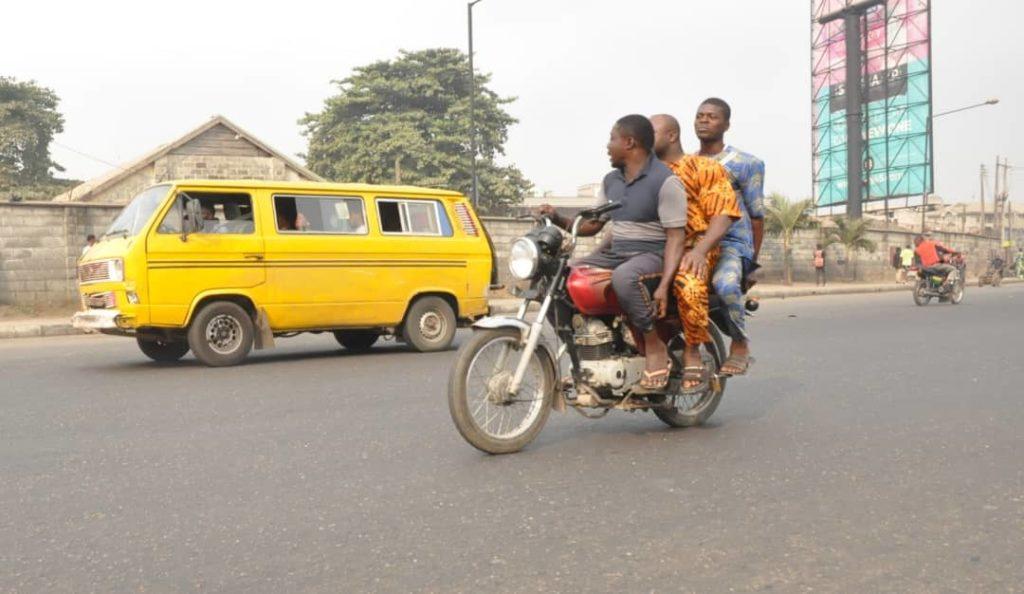 Okada rider with passengers at Yaba

.Harps on alternative means of transport

Lagos State Government has appealed to residents to patronize alternative modes of transportation in the state following the ban on commercial motorcycles, also known as Okada, in six Local Government Areas and nine Local Council Development Areas, LGAs/LCDAs of the state.

While urging operators and residents to fully comply with the order, government reiterated that the ban was taken to ensure the security and safety of residents.

The state government had on Wednesday, June 1, commenced full enforcement of the ban which recorded a high level of compliance across the metropolis.

State Commissioner for Information and Strategy, Gbenga Omotoso, made the remarks on Wednesday while speaking on the development during a television programme.

According to him: “During the first quarter of this year, the record shows that over 1,712 accidents were recorded, with okada constituting 767 or 45 per cent of them.

He reiterated that during the meeting with Divisional Police Officers, DPOs, Area Commanders and the Commissioner of Police, Governor, Babajide Sanwo-Olu handed down the explicit instruction of ensuring effective enforcement of the ban.

Giving details about plans for an effective clampdown on okada, the Commissioner said: “I want to assure Lagosians that the security agents will do the right thing when enforcing the ban and carry out the exercise in a professional manner because the ban is people-driven.

“The local governments are involved; community development associations are involved; everyone is involved in taking back our state from the tyranny of okada.”

On alternatives to okada, Omotoso said the state government launched over 500 First and Last Mile buses while 200 have been rolled out in the last weeks to serve as an alternative to okada.

“The State Government is doing a lot in transportation, which is the first pillar of the administration’s T.H.E.M.E.S Agenda. 15; jetties are under construction and some of them are at 90 per cent completion stage.

“Some in areas like Apapa, Liverpool, Ijede, Ilashe, Ajido, Ebute-Ero, Mile Two and others are being completed.

“In the last three years, LAGFERRY has been operating with no single record of accident; so, Lagosians are encouraged to use these alternatives to ensure the safety of all,” he stated.

He expressed optimism that by the end of 2022, the Red and Blue rail lines will be completed and commercial activities will begin first quarter of next year to complement road and water transportation.

“The Lagos Traffic Law of 2012, reviewed in 2018, says that Okada and tricycle must not be found on major highways, major roads and bridges in any part of Lagos; so no one should feign ignorance,” Omotoso said. Presidential primaries and the illusion of choice
Leave a comment